Voting events are a great alternative fundraising format. Capture a large audience with voting events such as Dancing with the Stars, Stand-up Comedy Contests, Battle of the Bands, and Lipsync contests. We offer a text to vote platform to raise money. 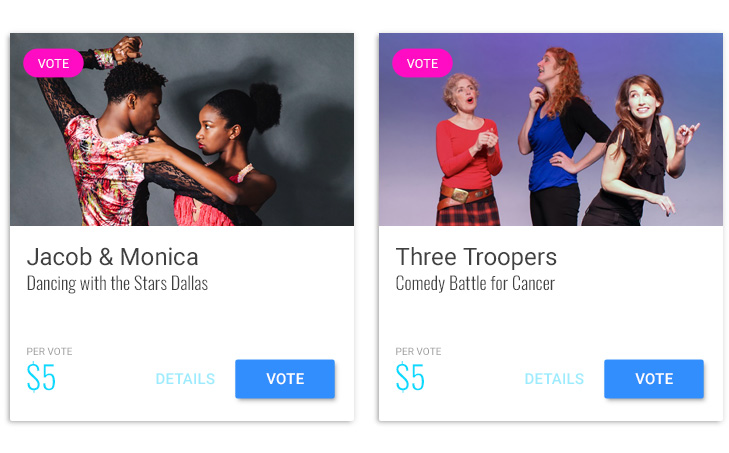 Dancing with the Stars? Best Yard In the Neighborhood? An Employee of the Month? If you need to vote, we have you covered.

Event.Gives software has worked with events in the past to raise money through voting. We offer a text to vote platform which enables the audience to vote on winners by texting a number. If a vote is $10 the audience can vote for a particular participant by buying as many votes as they want. This ramps up competition for the event. Those who pre-registered for the event will receive a text at the end of the night to notify them that the voting is open. Those who did not pre-register simply text the event’s keyword in order to vote. The audience can now vote on multiple contestants by texting the number of the contestant and how many votes they would like to donate towards this contestant.

Event.Gives has used text to vote to raise money selling purchases to vote with many events in the past. Our software was used for Dancing with the St. Louis Stars. Our auction software assisted the event in raising $33,500 to support adults with mental illness. We have also hosted stand up comedy contests by supplying vote purchases to the audience. The audience texts to vote and checks out for their vote to be activated in the system. UPS San Antonio Inside Sales has used texting to vote to present a battle of the bands event. Another event type we help with are lip sync contests. The American Lung Association presented the Lip Sync for Lungs Live Battle in Charleston, SC with Event.Gives software. Event.Gives helped them raise $17,886 for The American Lung Association. We have many events such as these that utilize our text to vote system. It is one of the most effective ways to raise money for a cause.

These voting events are an easy way to raise more money by capturing a large audience. Generic voting events take more time and hassle away from the competition because of voting sheets and lines. With Event.Gives you are able to easily raise money and save time organizing the voting for the charity. Use our technology for your next event to boost your fundraising revenue.